Fazioli grand pianos are produced since 1981 in Sacile – north-east Italy. This region is famous for woodworking since ages.

Fazioli differs from the other brands in many aspects. What is easy to notice is its Italian name. What more, the probation of the company lasts a little more than 30 years. That makes it so unique.

What else is worth mentioning is that the longest grand piano on the piano market came out from the Paolo Fazioli factory. They only produce grand pianos. Fazioli offers 16 models. 10 special and 6 serial.

The company is active since 1981 which is relatively a short period of time among other piano brands.

Fazioli is not only European. It is Italian. The consequence of that is the name of it sounds Italian. Most brands have German names after its founders.

Paolo Fazioli comes from a carpenter family. Since his early childhood he showed musical talent and he had a special interest in pianos. In 1980, four prototypes of grands appeared. F183, F156, F228 and F278. The numbers defining the particular model are also their length in cm. Official establishment of the company dates on January in 1981. Four prototype models were introduced to press and the audience at the exhibition in Mediolan in the same year. A month after establishing, Fazioli presented their first offer at the Musikmesse fair in Frankfurt.

Providing the F278 model to Teatro Comunale di Monfalcone resulted in long-term cooperation. Many famous pianists performed there with this instrument. In 1986 the Fazioli factory launched the longest piano in the market – F308. It is named after its length, as most of the grands are. One year later, the prototype of this model was used by a French pianist François Joël Thioller to perform a Tchaikovsky piano concert. In 1987, the Fazioli offer was completed by the middle size F212 model. At the end of the year, in collaboration with the R & D Zanussi Centre, the factory has improved all six models, which now constitute a full range of Fazioli brand models. The number of instruments produced annually varies between 120 and 130.

Fazioli Grands characterized by integrity and loyalty to the ideals.
The company does not have aspirations to transforms itself into a huge corporation, but it depends on producing unusual instruments with unique sound. 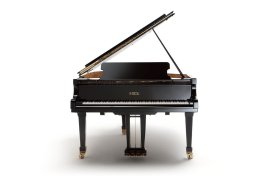 The smallest of all Fazioli grands. Despite little dimensions it has clear and strong sound. 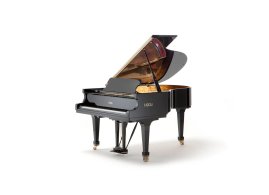 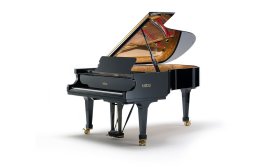 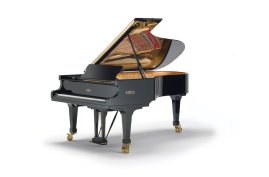 Action and dynamics simmilar to F278 model. Strong and deep bass makes it perfect to medium concert halls. A bit smaller than regular concert grands, with its rich tone, F228 will work well in the ensemble or on solo performances. 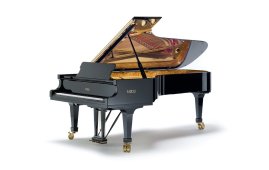 Standard size concert grand piano.
Classical instrument for big concert halls and recording studios.
Wide range of dynamics and rich harmony make up the power of the sound of the piano. 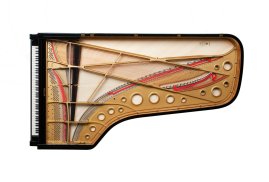 Jewel in the crown of Fazioli brand. The longest model in the whole offer. It will be visible and hearable in the biggest concert hall. Unusual richness of harmony owes to lengthened bass strings. Fourth pedal, which is Fazioli invention, allows to reduce volume without intervention in timbre.